Problems and Prospects of Car Transit to Russia through Finland 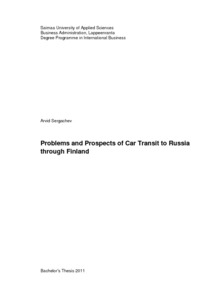 The actuality of the subject is proved by the increased volumes of car transit through Finland to Russia in recent years. Despite a 50% automotive market decline in Russia in 2009 caused by economic crisis, the volumes of delivered cars already in 2010 performed a considerable growth. Hence the purpose of the thesis was to identify the main problems in that logistics field and to review possible solutions which could be applied for best optimization of the cars’ transportation processes.

The thesis topic considers applying of a qualitative research method. Lots of printed sources such as documents, professional magazines and interviews of different businesses’ and officials’ representatives were studied. Due to that approach the obtained information was most up-to-date and the research experience was thorough. As the thesis covers broad aspects of cars delivery process, its results will be useful both for logistics companies involved in the cars transportation business and economic organizations like The Russian-Finnish Chamber of Commerce.

The research consists of three parts. First, it was necessary to conduct the Russian automotive market research for the pre- and post-crisis periods. A theoretical material was also used widely. Second chapter contains actual problematic of cars delivery process eliminated through its different aspects. The last chapter proposes a variety of possible solutions of the reviewed problems, which will provide best results only being implemented integrally by different market participants including the Russian Government.

The study found that the Finnish route of cars import to Russia still enjoys high popularity among Russian car dealers. According to the data for May 2012, its transit transportation volumes decreased by 51% in February-March 2012. These results in many respects can be explained by growing competition from Russian port of Ust-Luga, which performed 70% increase in transshipment volumes in 2011. However, the Finnish transit route is expected to remain actual for exporting Russian manufactured vehicles to Europe and other parts of the World.