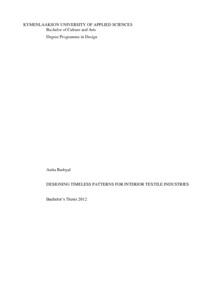 The project was aimed to capture timeless element in textile patterns which do not represent a specific time period so that such patterns can be used again and again. They always look trendy.

Different methods have been used to create design idea for textiles patterns. Firstly a material research was conducted to gather information of already used patterns in different time periods and in different ethnic textiles. It helped to understand about the already existed patterns. After collecting the required information from the material research, design process was started. Firstly few keywords were generated based on the desired goal, and then patterns were designed. A questionnaire was conducted through Facebook and emails to find out whether the targeted goal is achieved or not.

Three different patterns are created as the outcome of this project. They are made up with zigzag and curved lines. It is found from the material research that such zigzag and curve lined patterns have been used for a long time. Lines are placed irregularly to create patterns. Though such lines might have been used already in textile yet irregular lines and colors have given a modern look to these patterns. The result of the questionnaire also showed that those patterns have modern elements. So, those patterns look modern and also the traditional at the same time. They are timeless.