DESIGNING A STAND FOR LAUNCHING A PRODUCT TO AN INTERNATIONAL MARKET 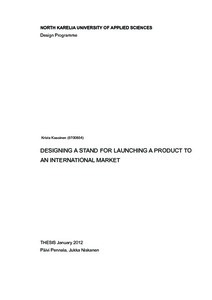 Companies have a need to differentiate from competitors. The more competitors, the harder it is to be original. Having an attractive product alone is not enough for customers. Today, product qualities require functionality but also something customers can identify with. Design is about making products easy to use but also breathing life into new products. It is especially important to give the right image from the start for customers. Plasthill Oy decided to use a designer to ascertain customers’ interest. The designer was employed to create a stand for Plasthill’s new product which was to be launched at the international consumers goods fair, Ambiente.

In order to continuously produce beneficial work to the company, Plasthill Oy assigned the work to me. With this co-operation, using a student company would have the chance to explore the benefits design creates without risking large investments.

The work for the employer was to design and assemble a functional stand that presents a natural image of the product. The employment started 15.11.2010 and finished on 15.2.2011. The fair, located in Frankfurt, is the largest international consumer goods fair in the world. Factors to be taken into consideration were the business target group in the fair and the strict schedule.

After realizing the stand, reading literature about the marketing part of the launching process took place. The questionnaires adapted the feedback gathered on the stand and from the employer to confirm if improvements suggested would be beneficial in the future.
The stand which was created, was the second most prevalent, chosen from four different options. From that we can make a conclusion that the design could be improved with minor changes but overall the designed result was functional and satisfied the customers’ needs.