Loneliness among elderly widows and it’s effect on their mental well being : Literature review 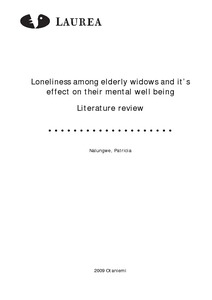 The loss of a spouse in elderly women is the most disorganizing life event they can ever with stand. The purpose of this study was to describe loneliness among elderly widows and its effect on mental well being of the elderly widows during the first year of bereavement, and to describe interventions to alleviate negative feelings of loneliness.
A literature review was done conducted on the basis of 47 research articles. The systematic search was conducted only from the reliable internet data base such as CINALHL, Medline, Biomed, Elsevier science direct, Pub med, sage journals & OVID in the field of health care, for recently published research studies in nursing and scientific journals. The data processing was done by content analysis.
Findings revealed that loneliness is a particularly relevant issue in relation to elderly widows, whose rates of mortality illness and depression exceed those of their married counterparts, everywoman who loses a husband through death experiences a painful period of bereavement, often accompanied by Severe loneliness, obsessive thoughts of the deceased, restlessness, insomnia, somatic complaints, and even hallucinations of the deceased, and poor mental well-being. However with structured interventions widows may be able to eventually recover from the loss and stand on there feet again.
This study was conducted under Loneliness project which aims at alleviating loneliness associated with elderly people in Espoo region. The project emphasizes the importance of combined effort of the community and society to alleviate loneliness.