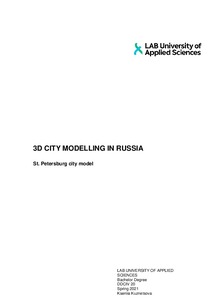 Kuznetsova, Kseniia
All rights reserved. This publication is copyrighted. You may download, display and print it for Your own personal use. Commercial use is prohibited.
Näytä kaikki kuvailutiedot
Julkaisun pysyvä osoite on
http://urn.fi/URN:NBN:fi:amk-202103093091

In this paper, considered 3D city models in Russia and examined in detail the model of the city of St. Petersburg. Methods of their creation are reviewed from the practical and theoretical side. Also carried a survey of construction participants of their interest in the emergence of 3D models of cities in public use.

The results of the study allow to get an idea of the development of three-dimensional urban modeling in Russia, as well as its current state in St. Petersburg in particular. This research also aimed to find out what problems related to urban modeling are currently facing the cities of Russia.

Summing up, Russia is definitely need to create open 3D models for the cities. They will allow to easily solve a bunch of current urban problems and to competent develop the municipalities in future. Current St. Petersburg city model that was reviewed in this study is now obsolete and is limited in use. And the survey results show that the production of a new open model of the city will be useful not only for the construction industry, but also for other areas of production.