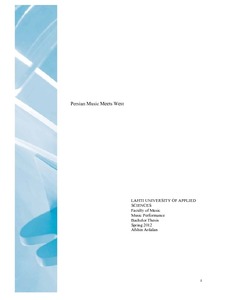 I have based my bachelor Thesis on the presentation of a completely different musical world, compared with the western musical world, which is Persian Music. As a Persian, I started to study music as a Persian Setar player; then I followed my musical experience through western classical music by playing classical guitar. As an ambition I have always thought about how to express Persian music in an understandable way for that of non-Persians. In this thesis I began with a short history of Persian music and then presented Persian Music features such as: Musical intervals, rhythms, instruments, improvisation, and also embellishments which have a great role in Persian Music. At the end I have mentioned some of efforts to implement Persian music on western musical instruments and at last I have represented two of my own compositions in Persian Music for the Guitar to compare the two completely different worlds. I also performed a Persian Music concert both on Setar and Guitar and put the DVD of the performance as an appendix.