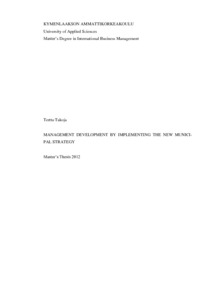 The new municipal strategy, based on Balanced scorecard system, was accepted in November 2010 by the Municipal Council, but needed to be implemented.

The objective of this thesis was to launch the new municipal strategy by the Balanced scorecard system and to support the management in implementation of the scorecards.

The theoretical framework of this thesis was based on development of strategic management and a tool for measurement; Balanced scorecard. The empirical part was implemented as a action research. The project group was nominated to accomplish the launching process. The project group was started in April 2011 and finished in March 2012.

The development project reached mainly the objectives of the project. The scorecards for 2012 were written by March 2012 for almost all employees. The whole personnel became aware of the new municipal strategy and were learning to set result objectives for themselves together with the supervisors.