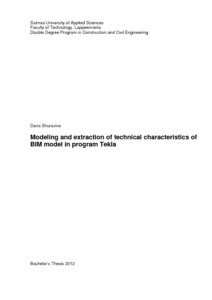 In this thesis for Oy Juva Engineering Ltd, a quantity survey was made using a building information model. The purpose of the survey was to estimate the price of the construction. The survey was performed on a building model that was created with program Tekla Structures.
Tekla Structures is 3D building information modeling (BIM) software used in the building and construction industries for steel and concrete detailing. The software enables users to create and manage 3D structural models in concrete or steel, and guides them through the process from concept to fabrication
In the first part of the thesis the main functions and features of the program Tekla Structures were considered. The analysis was made on the base of the model of the football stadium in version 16.1 of program Tekla. This football stadium was made with the help of architectural drawing, which was made in Larkas and Laine OY. In the second part all main structures of the building are considered. They include beams, slabs, columns, walls and others. Every part has its own features, which are also described. Eventually the material bill of quantities was made and the price of materials, according to the Russian rates, was given.
The bill of quantities can help us to determine approximate price of the construction for preliminary stage when we don’t need accurate result and when we need to prove the possibility of such buildings as mechanic stadium.