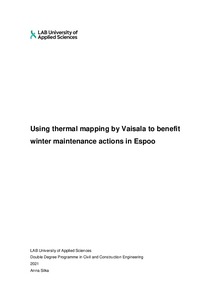 Silka, Anna
All rights reserved. This publication is copyrighted. You may download, display and print it for Your own personal use. Commercial use is prohibited.
Näytä kaikki kuvailutiedot
Julkaisun pysyvä osoite on
https://urn.fi/URN:NBN:fi:amk-202105178976

In winter 2019-2020 City of Espoo decided to improve winter maintenance treatment actions of the road network and cooperated with Finnish Company Vaisala. RoadDSS application which shows minimum road surface temperatures along the whole road network should help the City of Espoo to optimize snow plowing and de-icing of roads in the future. The thesis work studied the thermal mapping work principle, its algorithm of road surface temperatures calculation, and road weather stations’ equipment installed by Vaisala.

The goal of the study was to define a correlation between the “cold-spots”, the road parts that freeze first and need more treatment in winter, pinned by the measurements done in Vaisala’s Thermal Mapping, the “cold-spots” reported by the drivers of snow-plowing machines and statistics of car crashes in wintertime for the period 2015-2019 gained from Destia.

ArcGIS Pro, Esri’s product, was used as a tool for analysis and visualization. The final map was created for a visual representation of the correlation between these 3 datasets, which allowed to figure out the benefits of Thermal Mapping, issues that must be considered in the future, and prepare some recommendations for winter maintenance improvement in Espoo. They include an obligatory interview with street masters and drivers to add their findings over all 10 maintenance areas to the final map and the installation of extra sensors to monitor the road surface state near the shoreline and the coldest intersection of the road network.

Further usage of the thermal map for route optimization and creation of a web app showing real-time vehicle location data and progress of snow plowing and de-icing in each maintenance area of Espoo is offered as a recommendation for efficient winter maintenance treatment actions.