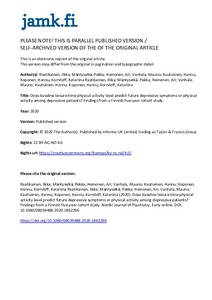 Methods
A total of 258 patients aged ≥35 years with clinically confirmed depression at baseline participated. The study was conducted between 2008 and 2016 in municipalities within the Central Finland Hospital District. Depressive symptoms (DS) were determined with the Beck Depression Inventory (BDI) with a cutoff score ≥10, and depression diagnoses were confirmed by the Mini-International Neuropsychiatric Interview (MINI). Blood pressure and anthropometric parameters were measured and blood samples for glucose and lipid determinations were drawn at baseline. LTPA, physical activity, and other social and clinical factors were captured by standard self-administered questionnaires at baseline and the five-year follow-up point.

Conclusion
Baseline LTPA did not affect the five-year prognosis of depression among depressed patients in a Finnish adult population. Because the baseline LTPA level predicted the future total physical activity, it could be included as a part of the overall health management and treatment of depression in clinical practices.