The Psychosocial Effects of Violence Against Children in Sub-Saharan Africa 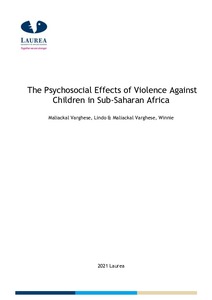 The Psychosocial Effects of Violence Against Children in Sub-Saharan Africa (594.8Kt)
Lataukset:


Maliackal Varghese, Winnie
Maliackal Varghese, Lindo
All rights reserved. This publication is copyrighted. You may download, display and print it for Your own personal use. Commercial use is prohibited.
Näytä kaikki kuvailutiedot
Julkaisun pysyvä osoite on
http://urn.fi/URN:NBN:fi:amk-2021061916411

Globally, children in different countries are subjected to various forms of abuse. It is estimated that up to one billion children between the ages of 2–17 have witnessed one or more forms of violence. Violence against children (VAC) has been shown to affect the physical, psychological, and social development of the victims who have experienced childhood violence. It has been classified as a public health, human rights, and social issue due to the significant impacts it has on the psychological and social development of the victims. The prevalence of one or more forms of VAC is determined by environmental and social factors such poverty, illiteracy, and cultural values.
The aim of the study was to obtain data on the psychological and social consequences of experiencing violence in childhood in sub-Sahara Africa. To achieve this aim, the study a) analysed the impacts of violence on children, b) examined the strategies adopted by governments and inter-governmental organisations to curb or eradicate VAC, and c) reviewed the prevalence of the various forms of VAC in the region.
The study adopted an integrative literature review method to answer the research questions and objectives. The data were generated from two social and healthcare databases. The data evaluation process produced 15 articles which were included in the study. Quality assessment of the included data was done using STROBE checklists for the observational studies, and CASP checklist for the qualitative studies.
The results of the study showed that there are various psychological and social problems associated with experiencing childhood violence. Thus, experiencing violence in childhood affects the life-long health and well-being of the child. The impacts of violence in childhood have been linked to mental health challenges, physical injuries and disabilities, impaired cognitive development, and an increased risk of sexually transmitted diseases. The study further showed the existence of a significant relationship between sexual violence, emotional abuse and self- esteem among children exposed to childhood violence. From the findings, the prevalent forms of violence in the sub-Saharan Africa region include sexual violence, child neglect, maltreatment, as well as physical and emotional violence.
Eradicating VAC is essential to protect the fundamental rights of children. Understanding the impact of VAC on the victims in sub-Sahara Africa will better direct the strategies countries will adopt to achieve the eradication of VAC. Also, identifying the prevalence of the various forms of VAC in the region will make it easier to know to which specific areas efforts and resources should be channelled.