Symbolism and Advertising in Pop Art 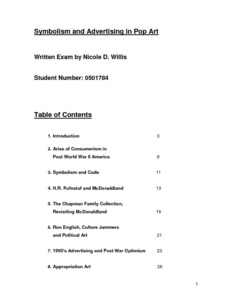 The premise of the written work on the subject of Symbolism and Advertising in Pop Art is to reveal that the thread of symbolism, in advertisement and other forms of media, whether it be ancient or contemporary, has been an intrinsic part of all artworks to date and that historically, movements in socio-economic structures of societies and their relative consumerism have been a catalyst in the direction of representational art works.

I will first approach the concept of manufacture of consent, which is investigated in the Al Gore book, The Assault On Reason, The Politics of Wealth. The indication of the concept of manufacture of consent, is that the same tools utilized to deploy political agendas, and to propagate public concern and spread political propaganda, are being appropriated by the advertising media in the present era of consumerism. With the rise of consumerism, the utilization of symbol is paramount in for the end result of increased consumption. Therefore I will reveal how the ancient pattern of symbol and code is continued in banal imagery of advertisement and how they ignite sensually to the public sensibilities, the longing for social acceptance, the appeal of a mass community, assembled by need of commodity, and fears of the outsider. With the definition of the words symbol and code I will reveal the relevance of the two terms in advertising and show it’s natural rise to the interest of the advertiser and in turn, the artist as a media outlet and a medium of artistic expression.

I will introduce how the reality of certain eras inspired movements in entertainment for children and adults alike, by the presentation of the media cultural phenomena of H.R. Pufnstuf, McDonaldland and their creators, the Croffts, whom were attendant to social climate of tolerance of drug experimentation of the late 1960’s and early 1970’s, which spawn programs like H.R. Pufnstuf, featuring characteristic anthropomorphization of inanimate objects, brash colors, and hallucinatorily inspired settings. The psychedelic result of a program designed to appeal to perhaps children and adults alike, being tremendously popular, touches on the allegorical quests of shamans and jesters, playing on themes of mythology and spiritual passage. In the adaptation of the advertising campaign of McDonaldland, with characters such as Ronald McDonald, and the Hamburglar, I argue the point of the semiotic nature of a seemingly benign advertising campaign that diversified the face of advertising, picking up the social trend of outsider culture and grasping an opportunity to sell the life style choice back to the revolutionaries whom were it’s original conceptualists. The Croffts employment by McDonalds to create McDonaldland, was commercialization of psychedelic culture to market unhealthful food products and the fast food chain menu of McDonalds.

The political position of the McDonalds fast food chain and its ethic on the means of advertisement to children is compromised by the factuality of the inferior food product. I will discuss how this politically loaded position is the frequent subject of cogitation, by artists such as Jake and Dinos Chapman and Ron English, of which they enlist the original psychedelic attributes of the creators Sid and Marty Crofft, as well as the insidious nature of the low quality fare of the fast food chain McDonalds. I will demonstrate the creepiness of the Ronald McDonald character, which is in turn rendered in blissful ignorance of the threat of obesity that the character peddles in usage for McDonalds fast food chain, in it’s representation of the institution of the globalization of the corporation in turn communal spaces, and the decline of spirituality over such a global corporation and the sublimation of consumerism.

I will then further explore the symbolization of the animal costumed character, in terms of its contemporary usage as well as the roots of its onset in African culture as a portal to the supernatural world, with the adaptation of animal mask or costume, comparatively the supernatural and aesthetic worlds, including costumed characters in rites to passage, in turn performance art form.

I will then address the relation of the adopted Pop Art attributes of mass cultural appeal, referring directly to the list of attributes authored by artist Richard Hamilton, creator of the iconic Pop Art collage, Just what is it that makes today’s homes so different, so appealing? in comparison to the attributes of the McDonaldland advertising campaign as well as the appropriation of its characters by the artists formerly mentioned. I will then discuss the works of Jake and Dinos Chapman titled the Chapman Family Collection to signify their possession of symbolic meanings of political nature as well as their conception in the Pop Art realm. I will follow with an analysis of the works of the artist Ron English and his curiosity with the sinister perceptions of Ronald McDonald and the McDonald fast food chain, and Camel cigarettes, as well as touch on the subject of other artists categorized as Culture jammers and their approach to the manifestation of political art. This will bring to light the enormity of significance that consumerism has developed and the position it holds to the mass audience and consumer. I refer to Naomi Klein’s book, No Logo, 2000 for references on the subject matter.