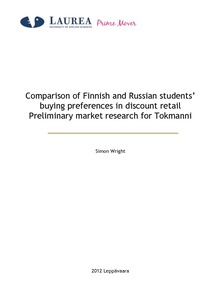 The purpose of this study is to compare the consumer buying behavior of two corresponding though culturally different market segments in the context of discount retail. The two target market segments are students in two countries: Finnish students in the Helsinki metropolitan area, and Russian students in St. Petersburg and Moscow. The study aims to provide market research information that may be useful to the leading Finnish discount retail chain Tokmanni in its market entry strategy for Russia.

The data for the study has been collected through a questionnaire circulated electronically and in paper format. The Finnish and Russian respondents both represent different Universities and fields of study. In Russia the respondents also come from two different cities. Such wider coverage of the fields of study and geography was an attempt to ensure the reliability of the data. The data were further exposed to the Pearson Chi-Square test to ensure reliability and validity.

The method of the research is that of quantitative analysis by establishing the main differences between the answers of the respondents. The most chosen answers within the two market segments were assumed to be their most likely consumer preferences. The Pearson Chi-Square test was used to test the reliability of the respondents’ answers based on the quantity of respondents.

The analysis revealed that the two consumer groups in the study are both similar and different in certain ways. There are demographic factors, such as family size, and a number of differences in the consumer preferences of the two groups of students. However, both the Finnish and Russian students appear to be price sensitive and favor sales discounts, and hence are hypothetically attractive market segments for a discount retailer such as Tokmanni.

However, the results of the Pearson Chi-Square test indicated a lack of reliability in the collected data, due to the low number of respondents as indicated by an Asymp. Sig. (2-sided) score exceeding 0.005. This would indicate that the answers are not likely to be consistent and replicable. A study with a larger respondent pool would be necessary to determine the reliability of the results presented in this study.