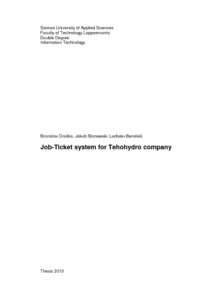 This bachelor thesis discusses a technical task, which was connected with the real company located in Lappeenranta. The objective of the work was to design and create a new information system used for management and administration inside the company. The idea about implementation of the new system was a response to the old one, which had several improvement needs. The work was commissioned by Tehohydro company.
The system has been developed with the help of Microsoft technologies. The development environment was Microsoft Visual Studio 2010 and the programming language was C# using Microsoft .NET Framework 4.0. The database was designed and created in Microsoft SQL Management Studio. All knowledge and information about these technologies was mostly gathered from previous experience during studies in the home university, from real practice work in a company and from the internet.
The final result of this project was a fully functional information system, which has been the subject of numerous testing and subsequently has been deployed into the praxis. Many meetings with the customer in the phase of development ensured that all necessary functionality is included. The work can also be used as a task for the future students, because it may, for example, be extended by a web interface.