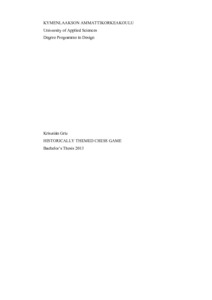 The Cold War was a defining period of 20th century history for Europe and the world.
From 1945 until 1991 Europe was divided as a result of the aftermath of the Second
World War, leaving two superpowers opposing each other’s philosophy about human
rights, freedoms, way of life. The cold war’s significance cannot be overstated, as it
left a permanent mark on the lives of millions of people, and still echoes in today’s
diplomatic and political events.
The aim of this project was to create a symbolic board game that reminds people of
the hopes and struggles of the time. The project hopes to present a neutral stance on
the period that captures the essences of the two superpowers authentically.
Research was conducted using many means and media, among which were various
documentary films and series, a number of fictional and non-fictional novels and
books, articles and essays, open university courses, and countless personal accounts
from people growing up and living during the events.
As a result of the research the project achieved in creating the feeling and atmosphere
of the time, which results from the correct implementation of various aspects of the
historic background, politics and diplomacy, propaganda, lifestyle, culture, architecture,
art and design.