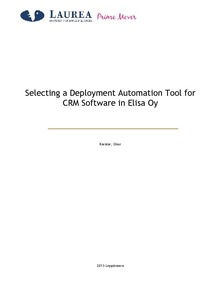 Software passes through several phases during its production process which are typically designing, developing, testing and delivering. In the software development life cycle (SDLC), the ultimate aim is to deliver the software product to its intended users with the expected functionality. Deployment is a critical step which harnesses all the work done in the previous stages in the SDLC and makes the software available to the end user. Thus, failure in the final deployment stage will waste the effort expended in earlier phases.

The responsibility for deployment usually belongs to operations teams and it is done manually or then partially automated, often using inefficient scripts. Manual deployment can be extremely difficult task, and it is easy to blunder with repetitive routines consisting of many steps such as setting up similar environments and installing software components in those environments. Some operations teams attempt to ease the manual work by writing scripts to automate the process, but ultimately this method can become complicated and burdensome.

The deployment process delays can be avoided and redundant costs eliminated in the error prone manual deployment process by changing the work culture and automating said processes. There are several products on the market to help automate this process. Achieving fully automated provisioning is the ultimate goal to produce and update services rapidly within enterprise applications in large corporations. Full automation is accomplished when the environments are set up automatically, and software installation is automatic in those environments.

The objective of this research is to introduce these automation tools to the Customer Relation Management (CRM) system at Elisa Oy and to develop a proposal for automating the deployment process as an alternative to its current manual process. CRM as a large system consists of numerous sub systems and software components. A deployment case with a selected tool will be demonstrated to show how the automation can be accomplished.