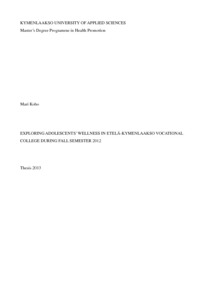 Most of the life habits even good or bad are formed during adolescence years. That is why it is so essential to promote adolescents´ health- and wellbeing status in at an early stage and, on the other hand, prevent bad life habits occurring.

Period of life between 10 and 19 years of age is generally considered to be the time of adolescence. Average age of adolescents taking part of this study was 17.4 years old and standard deviation was 3.06 years.

The aim of this study was to make an analysis of the health-and wellbeing status of the second degree students of Etelä-Kymenlaakson Vocational College, Ekami. The purpose was to reveal possible health problems and give targeted results to health care professionals and school staff working with the students to intervene with problems that comes to the fore from this study.

The data was collected via web-based questionnaire in November 2012. The survey included multiple choice questions. The survey consisted of 4 themes; health status, nutritional and exercise habits, social relationships & mindset and coping, assumption of tobacco, snuff, drugs and alcohol. The themes were chosen because the purpose was to gain a holistic picture of respondents’ wellbeing status. Themes were covered in the questionnaire with 47 multiple choice questions. All in all, 322 students took part of this survey, from which 154 were boys and 174 were girls.

The respondents level of general spirit was very high, only one fifth of students felt low-spirited sometimes or all the time. Cross-tabulation of gender versus perception of own immediate future revealed that there was clear evidence that girls had more negative perception of their immediate future than boys. All in all the study results showed that the girls should be addressed more when planning health promotion projects to this targeted group