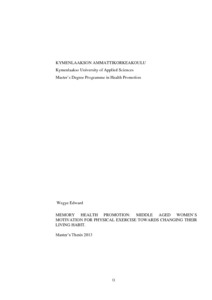 Global number of people with Alzheimer’s disease and other dementias is increasing dramatically. In 2010 it was estimated that about 66 million people will be affected by Alzheimer’s by the year 2030 and this number will increase to 115 million by the year 2050 as a result of global ageing. Physical active lifestyle has many measurable benefits to human wellbeing; this includes the reduced risk of several severe conditions such as coronary heart disease, hypertension, stroke and diabetes mellitus, obesity, osteoporosis and memory health problems including Alzheimer’s disease.

This Research was conducted via quantitative descriptive method using questionnaires. The total number of participants were (N=45) respondents out of 100 clients chosen from the two memory health promotion project sites namely Kouvola and Kotka in Kymenlaakso areas. The research questionnaires were developed by the researcher and the data was analyzed using descriptive Statistical Package for Social Sciences (SPPS version 19).

In conclusion this research result indicated that there is need for further investigation in this topic about memory health using different approaches such as nutritional approaches lifestyle modification etc. It is worth mentioning that there is also need to continue to educate general public and the women in particular about Alzheimer disease and memory health as women are more susceptible to this disease at old age.