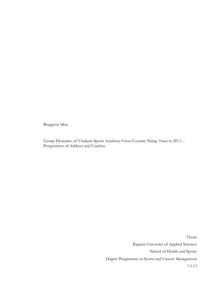 The subject of the thesis is group dynamics in the cross-country skiing team in Vuokatti Sports Academy at the moment. The commissioner - Vuokatti Sports Academy - and its coaches have been developing their activities for some time, and investigating issues related to sports psychology within the teams has been one of their objectives.

The purpose of this study was to describe the situation in the cross-country skiing team in Vuokatti Sports Academy at the moment, to find explanations underlying the research results and to provide development proposals for the future. The aim of conducting this research was to provide information on group dynamics, primarily for the coaches so that they could get tools to improve communality, group leadership, environment and motivation within the group of athletes.

The key questions were: what kind of experiences do the team members have from being a part of the team
what kind of insight do the academy and the coaches have into coaching and how it should be done in the academy.
This was examined by a qualitative method, which included essay writing, interviews and analysis of the research material.

In literature group dynamics is defined as the group members’ influence on each other, the performance and reaching a mutual goal. Previous research has shown that conformity to group norms has yielded a positive relationship. Schacter et al. (1951) examined the norm of productivity in a high- and low-cohesive group. Conformity to group norms is greater in teams high in cohesion. Similar findings have been found with sports teams (e.g. Gammage et al. 2001; Kim, 1995).