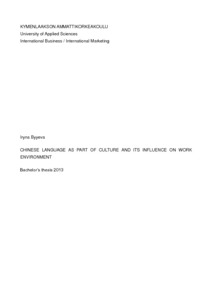 China is developing country. Its economical growth is one of the fastest in the world. The Chinese language is turning to very important language, thanks to the role of Chinese companies on the Global arena.
The present thesis discussed the importance of culture in forming peoples’ habits and social norms, researches the meaning of language as part of culture to global environment, and deals with the importance of different language skills in work environment and life of foreigners in China.
Literature analysis and personal interviews were used as sources of information.
The meaning of culture in forming the habits and norms is very high. Language is important part of culture. The Chinese culture has strong effect on its natives. Differences caused by a different cultural background are barely accepted by the Chinese.