How to reach out to more customers through Facebook: a case study for Captain's Shop 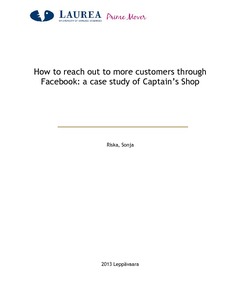 In the last 10 years internet usage has grown rapidly and people spend a considerable amount of time using search engines, reading newspapers, and connecting with friends and family online. The use of social media has increased considerably as well. Facebook, as the biggest social media network, has grown in the past six years to become a significant advertising channel for companies with over 750 million daily users.

The purpose of this thesis is to help Captain’s Shop use the social network webpage Facebook to access more customers, both new and old.

The study was executed during the end of 2012 and the beginning of 2013. A qualitative re-search method was used including two interviews with employees of the company, in which the same questionnaire was used for both interviewees. In addition to interviews, literature related to the subject was used. This literature was written by experts in this field.

The thesis was conducted as a case study of Captain’s Shop. As an employee of the company the author had access to all necessary internal information and benefited from informal discussions with other employees as well as personal experiences.

The results of the case study affirmed the need to advertise more through Facebook and it is recommended that the company implements the advertisement campaign.