CONSUMER BEHAVIOR IN THE TABLET COMPUTER MARKET IN MOSCOW 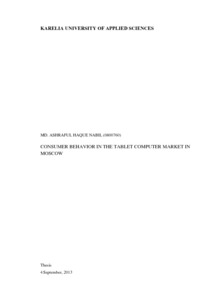 The data collection was carried out in Moscow, by using a survey. 75 customers in five tablet computer retail stores were interviewed. The outcome of the survey shows that tablet computer is a very popular IT product among all young and middle aged people. Day by day the tablet market is growing rapidly in the Russian market, especially in Moscow. In the Russian market, young students and professionals especially like tablet computers for social networking. The stylish look and portability is also another factor behind the popularity of tablet computers, which can make computing tasks a lot easier in many cases. Apple Ipad is the most popular tablet computer brand in the Russian market. Other brands such as Samsung Galaxy Tab, Asus Pad etc. are gradually becoming popular for offering good configuration at a cheaper price. Consumers prefer to buy mid-range tablet products more often according the best price/performance ratio. Men are the most frequent buyer in the tablet market of Moscow, as they like to buy it as a gift for several national occasions in Russia.

Tablet computers have a lot of things to offer almost everyone. However, the biggest target group which is the young generation and professionals has a huge potential in the market. Russia is already one of the biggest IT markets in the world and being the capital, Moscow has numerous possibilities in this sophisticated product lineup. Since the tablet computer is becoming more and more popular, a specialized shop only for selling tablet computers and relevant services would be very successful in Moscow.