Creating drawings with Tekla according to GOST 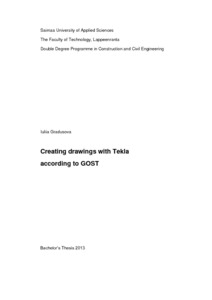 The study was commissioned by Finnmap Consulting Oy. The purpose of this thesis was to study the opportunity to create drawings with Tekla Structures according to the Russian norms, to study what can be changed and what has already been changed.
The thesis should be of interest to design engineers working with 3D modeling and for design engineers who are going to start working with 3D-software in Russia and according to the GOSTs.
The first part of the thesis contains the description of the actual Russian norms, their history and the prospects of the development, general information about Tekla Structures, using it in the world and in Russia, information about the development of Russian environment in FMC.
The second part includes the comparison of Tekla Structures with Russian Norms. The most important element of the drawing are described: marks, dimensions, tables and texts. It also describes the description of the general technology of programming in Tekla and the improvements which have been done: table changes, creating of the templates.
The last part describes the process of giving out the drawings, exporting them to DWG and printing from Tekla Structures.
As a result of this project, the advices on the environment development have been given; the template for dimensional layout drawings has been created. Based on these, the possibility of using Tekla Structures in Russia has been considered.