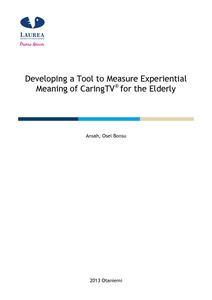 Improved healthcare services coupled with advanced technology have contributed to a global increase in life expectancy leading in turn to an increase in the ageing population worldwide. Demands on healthcare services have consequently increased dramatically making it imperative to search for effective ways to solve or slow down the associated problems. Technology and technology-based services have been envisaged as some of the possible means by which these problems could be controlled. Attempts have therefore been made in recent years to explore the potentials of technology to develop products and services such as CaringTV® to help address some of these problems.

CaringTV® is a virtual interactive service concept designed with and for elderly people and other target groups with an ultimate aim to support their well-being and enhance their quality of life (QoL) (Lehto 2008; Piirainen & Sarekoski 2008; Raij & Lehto 2008; Lehto & Leskelä 2011). The service concept has different uses including helping elderly people maintain their independence and continue living in their own homes. CaringTV® is still undergoing development.

In an attempt to find ways to evaluate the extent to which elderly people, their significant others, professionals other caregivers and people with exposure to or encounter with the CaringTV® concept understand CaringTV® as a means of providing supportive services to the elderly, the current study aimed at developing an initial tool called Experiential Meaning of CaringTV®-elderly and captioned EMoCTV-elderly.

Items best related to the constructs mentioned above, have been identified and operational into a 53-item questionnaire of the EMoCTV-elderly tool.

The EMoCTV-elderly tool would need to be validated in future studies to improve its usefulness.