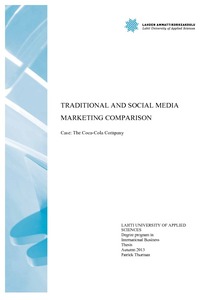 The majority of the research that has been done for the thesis is through the author’s own experiences using social media and other forms of advertising for different groups and projects. Information was gained by examining companies that both use social media effectively and those that do not for previous studies. The information that mainly covers traditional media and social media has come from textbooks and online sources to give validity to the author’s ideas, opinion and arguments. The majority of the information for social media has come from textbooks as well as internet sources, as to gain the most up to date information.

The intended result of this thesis is that companies or individuals are able to understand how to use the social media sites described and explained in this thesis, as well as those which will be used in the future. The reason for this is because the author is trying to not only explain about the current sites being used by individuals and companies but also allow the reader to start to look at social media in a new way. This would be not as a completely new form of advertisement but as a modified form of traditional advertisement with more possibilities. By thinking this way the task of learning how to use these new media forms does not seem so daunting. This relationship was proven by comparing two forms of marketing or advertising done by the company being examined, The Coca-Cola Company.