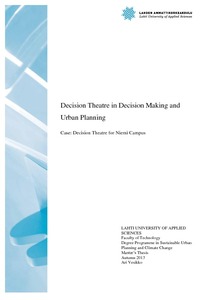 The aim of this thesis was to study the impact of visualization on the decision making process and establish an immersive information laboratory, named Decision Theatre, to help decision making. The laboratory was built for a project called Sustainable urban environment laboratory.

In the first part, the consistent decision making process, effective tools and methods are investigated and presented. Investigation shows that it is possible to develop individual and group decision making skills and techniques.

The third part presents the Finnish urban planning process from the national level to detailed plans, as well as regulations on how to draw up the plans.