Legal and Distributive framework for export of Russian animal-origin foodstuffs in Finnish Market. 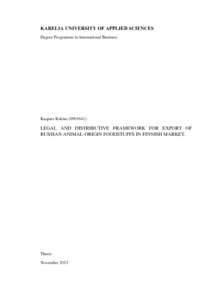 Russia’s membership of World Trade Organization (WTO) has triggered a change in country’s trade policy. Apart of decrease on tariffs and import/export duties Russian business personas will be provided with greater access to European markets and companies. This gave an input to explore a possibility for Russian foodstuffs to enter Finnish food market.
The qualitative research is used in this study, meaning that secondary data and primary data were used to describe and analyze following parts of paper: (1) distribution channels, (2) legal framework on Russian animal-origin foodstuffs trade from Russia to Finland (EU) including processed meat, fish and poultry meat products as samples (3) an overview of grocery distribution sector in Finnish grocers’ market, and (4) Case S-Group.
Thus, research discovered important results: the policy of foodstuffs purchasing and distribution by S-Group concluded that retailer is eager to take a control over operations. For a rightful trade of Russian animal-origin foodstuffs to Finland suppliers must be aware of certificates and requirements requested by European Union and retailer. The main issue turns out to be HACCP certificate. The Finnish grocers’ market is highly concentrated wherein large volumes are the most common features in supply chain despite a new social movement among Finnish customers. On the basis of study’s findings a general outcome can be concluded that there is a system which involves steps that must be satisfied in order to become a supplier of Finnish grocers.