Should There Be a Salary Cap for Top Managers in the Financial Sector? 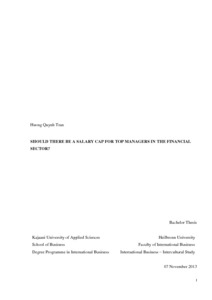 The thesis reviews current legislation concerning executive compensation in four selected countries including United States of America, Germany, Switzerland, and United Kingdom, as well as the European Union. The common trends among those countries and the union are Say-on-Pay vote and implementation of the Financial Stability Board Principles. Afterwards plus and minus sides of some regulations (including Say-on-Pay vote, European Union’s banker bonus cap and salary cap) are examined.

The theoretical background consists of two parts. Firstly, the concepts related to the asymmetric information topic, e.g. the terms “moral hazard” and “principal-agent problem” are described a little more carefully since they are quite relevant for the thesis’ topic. Secondly, the design of a typical executive compensation package is introduced. Although many elements of such a package are dealt with, stock options is the element that was elaborated the most, since in some perspectives it is the most complicated element among the mentioned ones.

Regarding the question: “Should there be a salary cap for top managers in financial sector?”, the author prefers the idea of covering loopholes in existing regulations, as well as imposing serious punishment on violators of applying a salary curb for senior executive officers in the financial industry.