Soil improvement by the method of microblasting 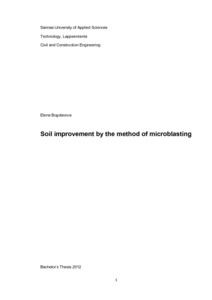 The purpose of this project was to study a new method of soil improvement by microblasting and the identification of the advantages and disadvantages of this method.
The information was gathered from literature, newspapers, articles, the Internet and by interviewing one of the authors of this technology- Rishard Imiolek. The first part of the study was carried out in February and April 2012 at Polbud- Pomorze Company (Poland) which is the owner of the patent for this technology,. Further study and familiarization with the process of soil compaction designing by using this method were conducted in an office in Russia in March and May 2012.
The results of the study show that the method of microblasting is one of the most effective and innovative methods of compaction of weak soils. Based on the theoretical study and the example of using this method in real life the disadvantages and advantages of the microblasting method have been identified.