FUNCTIONAL ANALYSIS OF THE OGUN FESTIVAL IN ONDO, NIGERIA 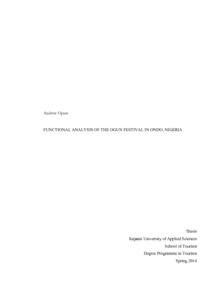 Cultural tourism have been identified as one area that Africa and Nigeria in particular can take ad-vantage of due to her rich and diverse culture, one aspect of aspect of the Nigerian culture that have survived and could serve the purpose of cultural tourism if the festivals. There are various rich, col-orful and exciting festivals across the regions in Nigeria but the Ogun festival in Ondo, South West-ern region of Nigeria is one festival that has survived through the years and is still celebrated annu-ally almost in its original state. Therefore, the main objective of this study is to attempt a structural functional analysis of Ogun Festival in Ondo. The scope of this study covers the description of the cosmology and religious beliefs of the Ondo people. A sociological analysis of manifest and latent functions of the festival both as a trado-religious festival and a cultural tourism product is also ex-amined. Since Ogun is connected with the origin of Ondo, a chapter is devoted to an analysis of the origin, the socio-political organization and the social structure of Ondo. The empirical part involved the use of qualitative research method, which includes interviews, participant observations and oral tradition. The study covers the preparation for the festival; the different stages of the ceremony as it is practiced in Ondo and the findings of the study include the impact of the study both as a reli-gious festival and as a cultural tourism festival. Finally, the recommendations and future prospect of the festival were examined.