The Influence of Mentoring on a Young Manager 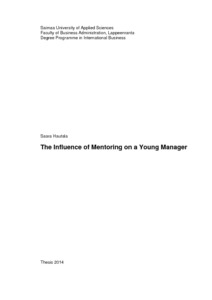 The purpose of the study was to examine the effects of mentoring on a young manager. In addition the intention was to write about the theory of mentoring because it is still quite an unfamiliar subject and the aim was to increase its awareness.

In the theory part of the study the main issue was to gather information about the theory of mentoring. Also matters of effective mentoring and outcomes of mentoring were discussed in the theory part of the study. The empirical part was done by interviewing six people from different fields of business. Some of the interviewees have been mentors, some mentees and some have not participated in mentoring at all. The empirical part relied on the interviewees’ own experience together with the author’s since she has participated in the mentoring program as part of the Management and Leadership Program in the Saimaa University of Applied Sciences.

Based on the findings it was possible to identify several positive and negative effects that mentoring has on a young manager, and also the other research questions of the study were covered. The most important effect that was mentioned in the literature and the interviews was the increased self-confidence and self-esteem of the mentee. This result also supported the author’s own experience about mentoring. The differences between theoretical and empirical findings concerned the internal and external effects. Literature emphasized the external effects such as salary and promotion and interviewees emphasized the internal effects such as self-confidence and personal development. Anyone who considers taking part in a mentorship program can utilize the results of this study and think whether this is the right tool for him/her or not.