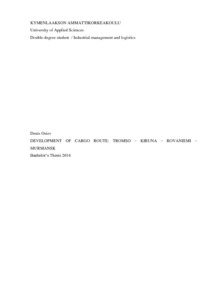 Thesis: Development of cargo route Tromso – Kiruna – Rovaniemi – Murmansk was chosen based on the logistic forum meeting with the countries of Barents region countries. The main topic of this forum was improvement in co-operation in transportation methods of Barents region countries. Main participants were: Russian Federation, Norway, Sweden and Finland.
The objective of this study was to find particular ways for development of the route: Tromso – Kiruna – Rovaniemi – Murmansk, which will connect four countries in one logistic chain. In this thesis route was considered as a project and the goal was to prove that this route is economicaly feasible and should be necasserly built.
This research was carried out by comparing annual reports from the customs services concerning amounts of cargo passing through the borders. The project route in this thesis compared to current situation and all information was found from the official sources such as customs of Russia, Finland, Sweden and Norway and logistics companies as well.
The main problem is the missing link between the areas on the route or undeveloped railroad network, which is not able to carry the necessary capacity. In the case of missing links there arises a problem of unreasonable time losses. The development of this network and co-operation in this development could be a solution to this problem since the time for transportation as well as costs would be decreased.