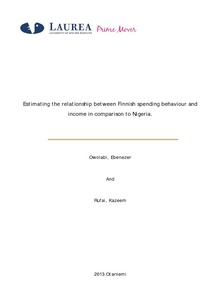 imating the relationship between Finnish spending behaviour and income in compari-son to Nigeria.pdf (297.5Kt)
Lataukset:

The need for business firms to expand business networks beyond the sores of its country entails taking strategic business decisions which could make or mar the business ideas or put the survival of the business in jeopardy if not properly planned. Hence, it is paramount to have in-depth knowledge of the economy that the firm intends to invest into. This is an empirical research work, designed to act as a planning tool for investors who intend investing into both Finnish and Nigerian market as it bring to fore major areas where residence of both countries spend their income earnings by estimating the relationship between the income and expenditures.

The essence of establishing the relationship is to know the various sources of expenditure of residence of Finland, which of these expense lines gulp more of their income, with a slight increase in income which expenditure line(s) are they likely to spend it on, are there rooms for the new entrants into the market where residence of Finland spend large portion of their income and so on. This thesis will also present this fact in comparison with other countries like Nigeria. The essence of the comparison is to understand what is obtainable in other countries and what opportunities, if any; that maybe taken advantage of.

In order to meet up with this task; the thesis employed the use of empirical research technique to obtain relevant information through the designing of a research questionnaire which were dis-tributed among the residence of both countries. This is to give an idea into areas of the economy where income earned is being channeled to or expended on. The choice of residence of both countries is based on the fact that, all classes of residence has got an income level to spend per week irrespective of the amount. Hence, it will be a wise idea for an entrepreneur to produce goods or services that will meet the needs of this people.

In order to ensure the success of the questionnaire distribution, efforts were concentrated on residences within the capital area of Helsinki including Helsinki, Espoo, Kauniainen and Vantaa. In Nigeria, the major and business areas of Lagos, Port Harcourt and Abuja are considered as a result of time and other resource constraints at the disposal of the researcher. More so, in order to ensure quick and prompt response, the questions will be simple and concise.

From the collected data, it is was deduced that the residence of both countries spend their income largely on basic amenities such as housing, feeding and clothing with residence of Finland having the tendencies to even spend more on leisure such as travelling, clubbing and so on if current earnings are increased.The research also revealed that there are different pattern of expenditures in both countries. The level of expenditure is tailored along with the purchasing power and also the taste of the residence. Hence, expenditure depends largely on earnings capacity.

Although the quality of life and standard of living differs considerably in both economy; bearing in mind that the cost of living also differs. Be that as it may, the population parameters of both countries suggest that consumer products and durable goods are likely goods that will thrive in Nigeria market.