Video Promotion and Advertising: YouTube Channels and Their Role in Promotion of Education 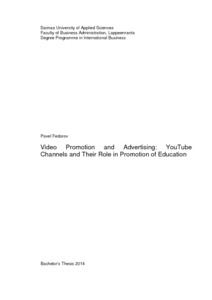 The purpose of this study was to explore the ways educational programs are marketed and promoted in social media (YouTube) by educational institutions (Saimaa UAS and LUT). This was done through analysis of the existing theory on the subject and content analysis of the channels hosted by both universities.
Mostly qualitative research methods were used. The theoretical framework was gathered from various literature sources, such as books, articles, newspapers, the internet and library databases. Theory provided information on definitions of marketing mix and its components, advertising content, promotional practices and strategies applicable to social media and role of promotion in education. Empirical data for this study were collected by analyzing the content of two YouTube channels, hosted by the studied educational institutions.
The results of the study show that YouTube is significantly underutilized as a promotional media by Saimaa University of Applied Sciences. The commen-taries and suggestions made as a result of this study may be used to support promotional activity at the studied educational institutions. Further study is sug-gested to explore the advertising and promotional efforts hosted by the same educational institutions in other social media platforms.