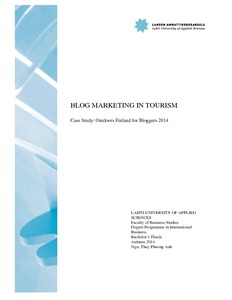 The past decade has witnessed a digital age surge in which marketing is universally shifting online and content is the future of reality. The revolution occurred because the audience is now in charge and the days of “interruption marketing” are over, instead “invitation marketing” is leading the game. In tourism practices, social media boom has had a major impact on how tourists and travelers search for information, produce information as well as make decisions; and passive consumers are transforming to active prosumers (producers and consumers). Among dozens of content marketing tactics, blogs have emerged to become the channel capable of delivering valuable content that readers would spend their precious time on thanks to its storytelling nature.

The campaign Outdoors Finland for Bloggers 2014 was organized to market Finnish natural landscapes and outdoors activities via international bloggers. The campaign was thriving although some problems appeared in the planning process. Thus, the aim of this thesis is first, giving a theoretical background for the case campaign; then, conducting an empirical research to assess the campaign performance and detect causes for its challenges. The findings of the research are employed to establish a development plan.

This thesis bears a deductive nature and undertakes quantitative and qualitative methods, in favour of the latter. Primary data was acquired from surveying related parties and secondary data was accumulated from publications like books, journals, previous studies and electronic databases as well as internet sources.

Findings from the research indicate that the campaign was indeed successful both in organizing and online reputation; the challenges the organizers faced mainly originated from shortage of time and weak internal communication. After the campaign, measuring its return on investment (ROI) has been difficult as well for a number of reasons. To tackle these issues, a blog for the campaign is recommended to be created and operated in the long run.

To conclude, the author has accomplished her objectives for this thesis and after examining, the research is perceived as highly valid and reliable. Alternatively, further research is necessary to discover a systematic methodology to calculate the campaign ROI, and to discuss the possibility of running a campaign blog.