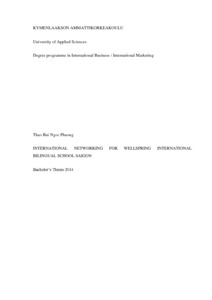 This thesis gave an overview of networking phenomenon and focused on building proposal for networking practices for the commissioner – Wellspring International Bilingual School Saigon. As international networking becomes more and more important to the development of business and education in the globalization era, Wellspring Saigon also recognized the need to international network with other education organisations and schools around the world. These future partnerships were expected to bring countless advantages to the school regarding the improvement of education programs, teachers quality and students performance.
After the theory and practices of networking were studied, the final aim of the thesis was the proposal for international networking. The proposal will be used to solve current issues of decision making and suggest immediate practical applications for Wellspring Saigon.
Because of the nature of the topic, qualitative method was used to provide in depth understanding of the networking phenomenon. Data collected through participant observation of the researcher during her training at Wellspring Saigon and in-depth interview with professionals and employees of Kymenlaakso University of Applied Sciences, Wellspring Saigon and Wellspring Hanoi.