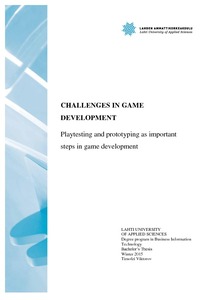 The mobile game market has emerged lately. For many developers it is much easier to enter this market because of the possibility to bypass the game publisher as well as the low costs of development of mobile games compared to PC games or gaming consoles. Though the barriers to enter the market have lowered a lot, the development risks remain at the same high level.

The purpose of this research is to find out how the prototyping and playtesting approaches help to benefit in game development. The theoretical basis for this study has been divided into two parts: the iterative prototyping approach as the game development methodology and the playtesting part. The research case is a 3D mobile game, which has been implemented using the selected methodology approach. After the implementation of the prototype, the playtests have been conducted and analyzed.

Based on the implementation part and the analysis of the observations and interviews made during the playtesting phase, the results of the study have shown that indeed the selected approaches help to benefit in the development of the
game. Playtesting has helped to determine weak points of the game as well as bring new thoughts about the improvements. Prototyping has helped to answer the game design questions and determine the flaws of the game in the early design stages.