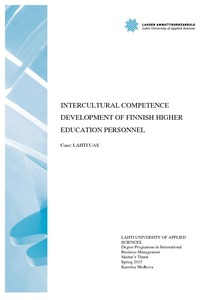 The background of this study is associated with an increasing number of multinational students and imported cultures in Finland. National has become international and new skills and competences may be needed to meet the changing education environment. This Master’s Thesis explores the current state of intercultural competence development in a Finnish University of Applied Sciences. The factors and challenges bound to this development are analysed and improvements proposed. The focus is on the institution’s employees; due to the close connection, students are also included to a certain extent.

The less-than-satisfactory results of the International Student Barometer survey served as a trigger point for this study. The research then began by reviewing the literature on culture and intercultural competence. The empirical section of the study consists of qualitative and quantitative approaches within a group of voluntary respondents from teachers and other school personnel. A preliminary survey was distributed to all Lahti UAS personnel in two waves, in 2014 and 2015. A survey was performed by 98 teachers altogether. Its purpose was not only to map the culture view of the school staff, but also to collect a group of volunteers from the target group, who were willing to participate in the following research. Subsequently, an Intercultural Development Inventory® questionnaire was filled in by 12 volunteers, followed by in-depth interviews. Results from all three stages of the research were analysed and as a consequence, intercultural development areas were recognized and recommendations were proposed.

As a conclusion, the survey revealed that the intercultural education of the school personnel has been neglected, and rather expected to be automatically achieved by all teachers and other staff. The outcomes of the survey draw attention to the need and the importance of developing intercultural competences among the employees. Subsequently, students’ intercultural competence is unfolded as well. The results show that new habits and skills in today’s changing world would significantly raise understanding, motivation, study success and well-being of all involved in the education process.

As a result, the institution would enhance its positive reputation and competitiveness as an international school and attract more students and maintain the quality of teachers and teaching results.