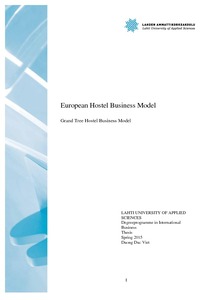 This study aims to figure out the most stable and efficient way to start-up a European hostel in Vietnam. By applying customer development theory in start-up, the thesis writer first forms his hypothesis of the service and the target market, and then has done some hypothesis tests by conducting surveys with the potential customers and performing a market analysis. Only since the hypotheses get tested, a next step of customer development theory will be carried on. By mentioning the next step, the writer means searching for a proper business model for a hostel start-up in Vietnam.

The thesis has been divided into three main parts. The first part is to find out the feasibility of the business idea, by analyzing the target market by its size, its achiveability, its stability and its profitability. After that, the service concept is tested by conducting a survey. Finally, an existing hostel is examined, in this case – CheapSleep hostel in Helsinki, to figure out the business model. Based on the examined business model, a new business model for a start-up is developed, which must assure to fit the conditions of a start-up.

There are several findings in this study. First, there is a sizeable, profitable and achievable youth hostel market in Vietnam thanks to a steady growth in tourism environment in Vietnam and in tourist arrival. Second, there is a need for better accommodation for economy travelers in Vietnam. To get more specific, there is a need for a European trendy hostel. Finally, the business model for a start-up is not similar to an existing business. It is much more complicated since a business must be built before getting running. Thus, the business model for a start-up is also developed into two phases, starting-up phase and running phase.