Conservation of the cultural heritages of Kathmandu valley 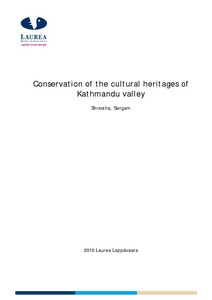 Conservation of the cultural heritages of kathmandu valley.pdf (2.179Mt)
Lataukset:

The main objective of this thesis project is to show the need for conservation of the cultural heritages of Kathmandu valley and to determine the current obstacles in the conservation process and solutions for these. Initially, information about the current situations was investigated and the problems were identified. After this, based on analysis of literature and empirical observation, recommendations were formulated.

The theoretical section will describe the Kathmandu valley and its cultural heritage. A qualitative research method was applied in the research process, with interviews conducted from October to December 2014.

Altogether four officials from Department of Archeology (DOA), Kathmandu, two officials from Kathmandu Metropolitan City (KMC) office, three craftsmen, six tourists and ten local residents were interviewed. The results show that the conservation of cultural heritage used to be an important part of life in Kathmandu valley. Both the socio-religious and political structures used to have high esteem for monument construction as well as protection. It has become the lifestyle and ritual practices of the people since the early period.

There has been rapid urbanization in the past few decades, which has also been unplanned and unmanaged. This has severely affected the heritage sites. Therefore, there is an immediate need to conserve the heritage in order to preserve this for future generations and save the identity of the nation. Both government and public are equally responsible in the conserving process. The public should be made aware of the importance of the heritage and their identity. The government should implement the rules and regulations regarding the heritage sites and should have proper coordination with local organizations and public.