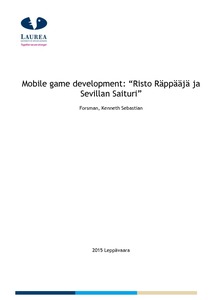 The main purpose of this thesis was design and development of a cross-platform mobile game with an existing franchise. The target mobile platforms were Google's Android, Apple's iOS and Microsoft Windows Phone 8.x.

The project began with studying different types of development and design methods to start de-veloping a game project for a customer. This document will describe the various steps of game design and development and mention how to solve some problems a developer might face in a game development project.

The project consisted of the development of a 2D endless runner game for iOS, Windows Phone and Android. Starting with a study of the customer requirements, benchmarking of other successful similar games were analyzed.

Next, the game design process was established, including the concept, story and mechanics of the game, which were the blueprints in the actual development of the game. Using Unity3d as the game engine for the development work and C# for the programming language.