Early stripping of slab formwork according to Russian standards 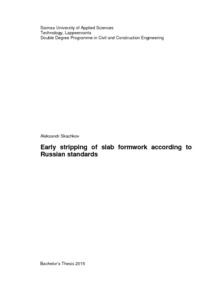 The purpose of this work was to make an overview of the modern methods for early stripping of slab formwork. The concrete technology was observed as a basis for every stripping procedure. Methods of concrete strength determination were examined according to Russian standards. The main points and the possibility of implementation of the maturity method were also considered. Doka Concremote was reviewed as an effective and economical solution for a real-time concrete monitoring tool.

The main idea of early stripping was disclosed and the recommendation according to ACI 347.2R-05 was presented.