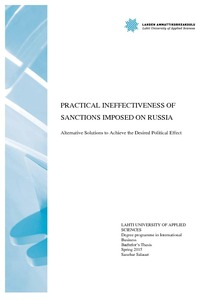 The economic sanctions imposed on the Russian Federation as a response to the illegal annexation of Crimea and destabilization of Ukraine by the United States of America and the European Union throughout the 2014 did not manage to achieve practical results as the military actions in Eastern Ukraine are still in the active phase and Crimea remains part of Russia. Thus, the ultimate goal of this thesis is to propose the alternative methods for the solution of this problem, which use certain economic measures as the instruments that could influence the decision-making process in regard to the foreign policy.

The deductive approach is used in this thesis and the research method is mostly quantitative for the empirical part, with qualitative method used in the analytical part. The data is collected from the secondary sources such as books, articles, journals, reports and the internet.

The core of this thesis consists of the three main parts. First, Russia’s national economy is analyzed from the structural point of view in order to understand its specifics. Then, the technical results achieved by the imposed sanctions are reviewed and the weaknesses are highlighted. Lastly, several alternative solutions are suggested for the implementation with detailed advantages presented for each one.

As a result, this thesis concludes that the proposed alternative solutions are feasible and effective from the practical perspective as they indeed serve the initial purpose of using the economic measures as an instrument for the influence over the decision making process in the field of politics.