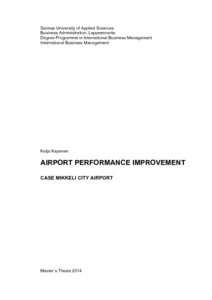 This study is qualitative research using case study approach where research data was collected using interviewing and analysing of secondary data. Study was carried out using the benchmarking technique for finding the ways of improving the performance of Mikkeli City airport. Performance indicators used in the study were input: employment effect and production capacity, and output: quantity of passengers. Hypothesis of the study was that from Stockholm Skavsta airport could be learned practises, which can be used to improve the performance of the Mikkeli City airport.