Redesigning the Concept of Guided Tours to Vyborg 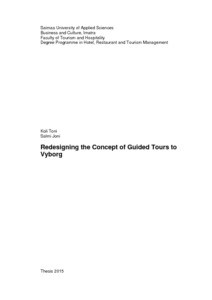 The purpose of the thesis project was to create a new packaged concept for travellers to Russia. The concept organized in the project was designed to be non-profit and was carried out as an individual project with small amount of cooperation with Itämatkat. The project aimed for a successful concept while at the same time figuring out relationships between expectations and experiences during the charter tour.

The theoretical background for the thesis was gathered from various sources including books, articles and lecture notes. The gathered information worked as a framework in creation of the new concept. The project concluded to the event, which was held on 25th April 2015 in Vyborg, Russia.

The results showed promising feedback for further development of the concept. The conclusions discuss different ways of improving the developed concept. Suggestions range from improvements in the itinerary to the performance of the guiding services.