Optimization of 2,3-butanediol production in a bioreactor by Bacillus amyloliquefaciens 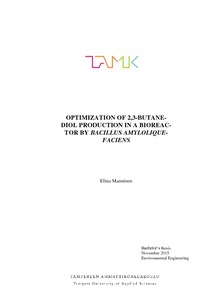 Three experiments were performed in a 15 litre fermenter during a three-week period at the Ostfalia University of Applied Sciences in Wolfenbüttel, Germany. Each of the tests had the same starting medium and measured parameters with the addition of one or two feedings of sucrose. By adjusting the different parameters, such as the oxygen percentage in the medium, air flow and pH, an aerobic growth phase and an aerobic production phase could be achieved.

The results of the optimization of the production of 2,3-butanediol show that sucrose can be used to replace glucose as the main carbon source. However, there was no significant increase in the production of 2,3-butanediol with the addition of the feeding. While adjusting the availability of oxygen a clear growth and production phase can be distinguished. The results were positive although there is need for further experiments with more advanced analytical methods, and upgraded measuring devices.