A Further Development of a Generic JavaScript-Based Language Matching Framework 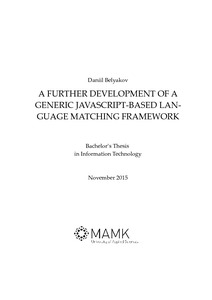 This thesis tests the assumption: it covers the theoretical topics of Finite Automata, Regular Languages and Algorithm Complexity. The theory is further used as a base for building a simplified version of Whynot with Deterministic Finite Automata as underlying structure and testing it against the original Whynot.

The test results show that, under a certain assumption, the change of the underlying structure of the framework to Deterministic Finite Automata leads to decreased system complexity. Moreover, the new system is found useful as a base for further researches of possible Whynot developments.