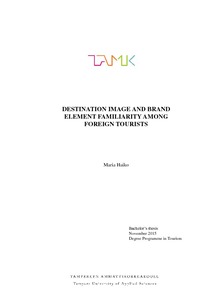 The aim of this thesis was to find out which attributes foreign tourists associated with Tampere city and how familiar they were with the visual components of the city brand during their visit in autumn 2015. In order to map the perceptions of foreign tourists a research was conducted. Both primary data and secondary data were needed. At first secondary literary sources were used to gather information about the theoretical framework used for branding and image. The fieldwork consisted of conducting a survey by using a questionnaire which a randomly picked sample group was requested to self-complete at various locations around Tampere city.

The results revealed that the image of Tampere among the sample group was mainly positive but very general without distinctive elements. Tampere was strongly associated with friendly people when the respondents could choose from ready-made answer options, but not when they were encouraged to come up with describing words on their own. Variables with impact on the answers were taken into account in the analyzing process. More respondents were familiar with the logos than the slogans of the region brand.

It is stated that the name of the region brand is connected to the industrial history of Tampere city as well as to the culture and nature the region has to offer. Among the sample group Tampere was associated with positive or neutral attributes, but its image was quite vague and without a strong link to the city's history or cultural offers. According to findings from the sample group the city has advantages but could utilize some of its strong points more to evoke a clearer image among visitors.