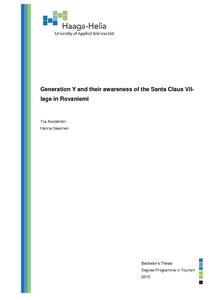 The Santa Claus Village is one of the biggest tourism attractions in Northern Finland, and the city of Rovaniemi has been titled as the “Official Hometown of Santa Claus”.

This thesis studies the level of knowledge of the Santa Claus Village and the affect the village has on the incoming tourism in the Rovaniemi. More specifically the focus is on the perceptions of different nationalities and generation Y, as in young adults with no children. The thesis was commissioned by Rovaniemi Tourism and Marketing Ltd.

The theory part looks into the different aspects of effective destination band city branding. Furthermore the thesis discusses the possibilities and challenges of providing accurate service experiences for the more and more demanding and conscious modern day tourists.

The data was collected through an anonymous online questionnaire during a three-week-period in October and November 2015. Altogether 154 responses were gathered with four different language versions of the questionnaire.