Cross-sectoral cooperation in Finnish schools on the move programme 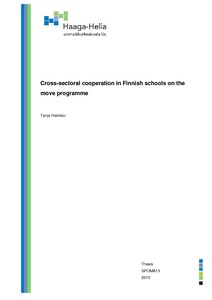 Finnish schools’ on the move programme is a project that aims to increase physical activity into the school day and through that make children more active and increase school satisfaction. The purpose of this thesis was to find out how widely municipalities have cooperated with different stakeholders. Effective health promotion requires collaboration, and Finnish schools’ on the move programme is health promotion at its best. The purpose was also to get information about how well the municipalities have succeeded in communication and change management. The specific study questions were: have the municipalities done cross-sectoral cooperation during the programme, how well different parties have been involved, and how important has the programme been according to the answerers who were administrators of different municipal departments.

The information to this study was gathered with Webropol survey. The questionnaire was sent to all the municipalities who had been involved either in the pilot phase or in the programme phase. The survey was sent to representatives of four administrational departments: education, sport and leisure, technical and health department.

Cooperation had increased moderately during the programme. Collaboration between schools, sport and leisure department, and sport clubs had increased the most. Health de-partment and technical department were involved in some municipalities but the cooperation wasn’t as strong as with the parties mentioned earlier. There were no major differences be-tween smaller (n=33) and bigger municipalities (n=24) when comparing the results. Educa-tional sectors and sport departments answers were also compared with each other and those were also pretty similar. Closer look on answers received from project leaders (n=7) revealed slightly bigger differences. Especially participation of health services and youth work was estimated much lower. The number of answers from the project leaders was much lower than sport and educational sector so the results are not as reliable. Conclusion on the base of these results is that the size of the municipality don’t have an affect on the level of the cooperation. It also seems that the project leaders’ interpretation differs most from the others. This might in-dicate that accurate information about the project hasn’t reached everyone. Importance of the programme could be seen from the results. All the parties were unanimous in this matter and the average to the question was 4,42 when the scale was up to five. This was the highest evaluation of all the questions.

On the basis of the findings it could be said that it is worthwhile to continue the programme. It is perceived as an important project that clearly has a positive effect on children’s school day. Strengthening the administration and cooperation with different parties is recommendable. These actions together helps to build permanent healthy culture in schools and spread it also more efficiently to other schools.